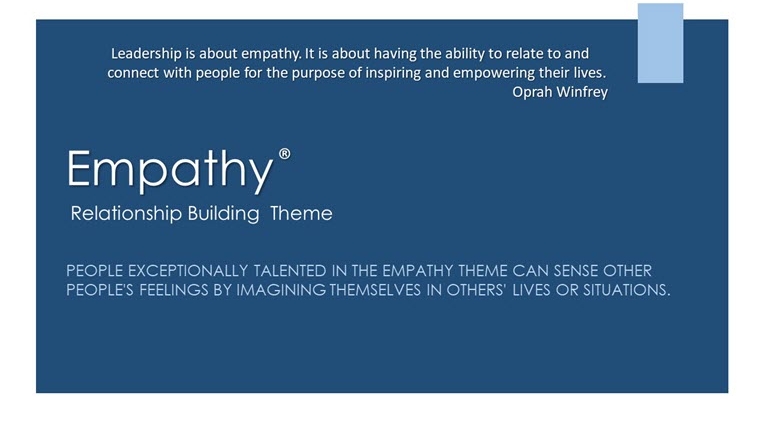 People with Empathy® have “emotion thermometers.” They have an innate ability to tune into the emotional world, and their emotional thermometers can sense both pleasant and unpleasant emotions. Individuals with Empathy see the world through other people’s eyes. Their emotional intuition enables them to understand others.

People with Empathy give a voice to the emotional world. The Dutch Post-Impressionist painter, Vincent van Gogh, said that emotions are the captains of our lives, meaning that whether you like emotions or not, your life is influenced by them. Empathetic people understand Van Gogh’s famous statement and see how emotions guide the lives of others.

Empathy is an uncommon strength. Gallup says that only 18% of people who’ve completed the CliftonStrengths® assessment have Empathy in their top five. This tells us that most people don’t automatically respond with empathy.

Professor at the University of Houston, Dr. Brené Brown, believes that “Empathy fuels connection,” and “Sympathy drives disconnection.” She has a Netflix special that is intended to delve even deeper into how important empathy is in our lives. Simon Sinek, author and former Columbia University professor, believes that “Empathy is the most important instrument in a leader’s toolbox.”

If you are one of those 18%, who have the strength of empathy, you can not only authentically lead people with empathy but build a viable business on your talent.

Someone who has made a career by using empathy is Oprah Winfrey – it is her empathy and ability to connect to people who have made her successful. Oprah Winfrey came from nothing and built a media empire.

When dealing with others’ emotions, Oprah puts herself in their shoes and pauses to reflect on what she can do to be most helpful in any given situation. You can do the same thing with your clients. Listen to what your clients are telling you and figure out how you can help them in the situation they are in.

Using her power of empathy, she develops a high degree of trust, rapport, and mutual respect with her guests. She does this by asking thoughtful and probing questions that draw out implications and feelings, which in turn, fosters a deeper connection. When she builds this level of trust with people on the show, people who watch the show or read her books or come to her conferences feel this connection also. Do the same with your clients and watch what happens.

Oprah not only does this with her guests but with the people who work for her. She firmly believes that empathy is a glue for engaged teams.

Janet Lee worked as senior field producer for the Oprah Winfrey show for 20 years.  In a 2011 interview that she did with Emily Co, Janet shared some insight into what it was like to work for Oprah.

In her account, she talks about Oprah as an empathetic leader who is kind to everyone who works for her, from the janitor to executives.

Though she is a billionaire entrepreneur, Oprah makes an effort to know what is going on in the lives of her employees. This kind of care and consideration from managers boosts productivity and job satisfaction.

‘She always knew my name, she knew what was going on, and would surprise me when she would know my next assignment. I’ll be in the audio booth with her, recording some voiceovers, and she would say, ‘Oh gosh, you just came back from Dallas, and now you have to do that shoot over in New Orleans to cover the Katrina floods?’ It was just amazing — how would she even know that?”’ She would know that by using her empathy to care about what was going on with the people who worked for her. We sometimes get so focused on the outcome of the job that we forget the person who is doing the job.

Do you use your strength of empathy to build trust with your current staff? How could you like Oprah use this strength to build trust with your customers and also become that billionaire entrepreneur? Let me know in the comments below. Want to talk with me about how you could monetize your strengths or other business-building questions you have? Please schedule you free Ask Brent Anything call, and let’s talk strengths.