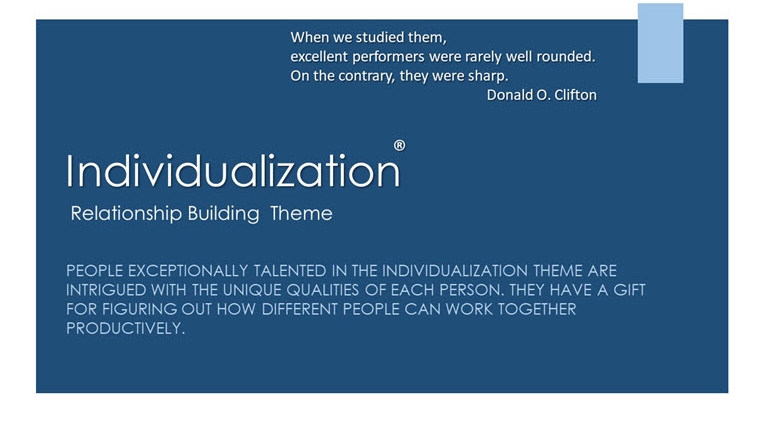 Individualization® refers to those who love to discover the uniqueness in others. Individualizers believe that each person has his or her own unique, special story. Instead of seeing people’s similarities, Individualizers see differences—the things that make other people special.

Individualization is my #2 strength, and it helps me observe people’s strengths as well as their struggles. I call it my Strength Spotter and Star Maker.

I remember hearing one Individualizer say that when he started hearing people’s stories, it was as if balloons were popping up over their heads like cartoon characters. The balloons told him what was going on with them, what they were thinking, what they were feeling, and what they wanted.

Donald O. Clifton, had Individualization as his #3 talent. Clifton was recognized with a presidential commendation from the American Psychological Association as “the father of strengths-based psychology and the grandfather of positive psychology.”

After serving as a World War II pilot, Clifton served as a teacher and researcher in the field of educational psychology at the University of Nebraska–Lincoln from 1950 to 1969. While at the university, his research focused on identifying the talents of successful people. While doing this research, Clifton developed the strengths theory instead of studying what was wrong with people. Working within his theory, he identified that successful people had specific personal talents that helped them in their work. The question he wanted to answer was, “What would happen if we studied what was right with people versus what’s wrong with people?” Later in his research Clifton named Individualization as one of those talent themes.

You can see how Donald Clifton began to monetize his Individualization when he left the university, founded Selection Research Inc. (SRI) in Lincoln, Nebraska, helping private and public entities with employee selection.

Up to the point of being acquired by SRI, Gallup was known for its public opinion polls by George Gallup. With Clifton as the chairman, Gallup expanded beyond public opinion polls. Gallup entered the management consulting business, consulting with companies on ways to improve their businesses by not focusing on their employee’s weaknesses and trying to fix them but by honing in on their employees’ strengths.

The online assessment tool Clifton StrengthsFinder (now known as CliftonStrengths) was developed by Clifton In 1999. The assessment that we all now know and love that focuses on 34 talent themes that make up the user’s natural ways of thinking, feeling, and behavior gives us an Individualized language to use when working with people to hone in on their individual strengths.

Though passed away in 2003, Donald Clifton provided the framework that has inspired millions of people, helping them to find their individual strengths and become their best selves.

More than 90% of Fortune 500 companies have used CliftonStrengths to bring the power of strengths-based development to their workplace culture. (Allowing companies and their people to identify their individual strengths and refine the talent into engaging strengths.) To date, over 23 million people have taken the CliftonStrengths StrengthsFinder.

Individualization has the power to allow you to instinctively observe an individuals talent, style, motivation, thinking, and how they build relationships.

What ideas do you get from Donald Clifton on how you can monetize your Individualization strength? In what ways do you see that you can use this strength to build productive teams by leveraging the team’s individual strengths so that everyone can do what they do best?

Let me know in the comments below. Want to talk with me about how you could monetize your strengths or other business-building questions you have? Please schedule you free Ask Brent Anything call, and Let’s Talk Strengths.