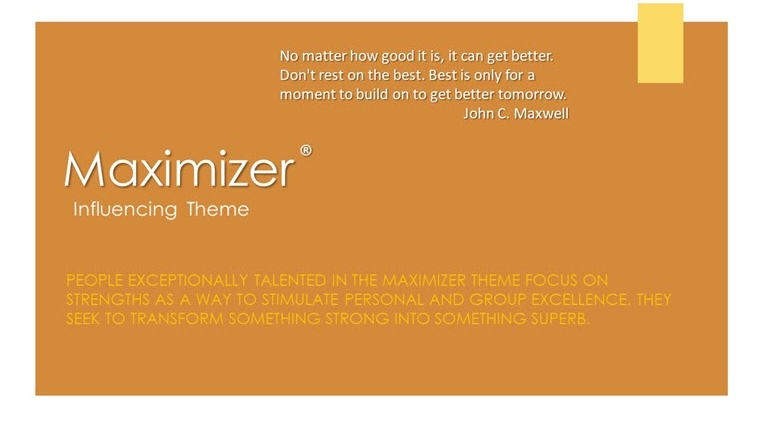 Are there people in your life that are consistently improving upon excellence, whether its career, leadership, or world-class entrepreneurship? Who do you know that is always enhancing, upgrading, and perfecting anything in their path?

If someone has ever encouraged you to go beyond what you think is your capacity, been pushed to become beyond noteworthy, or infinitely amazing, you probably have been influenced by someone with the CliftonStrengths theme of Maximizer®.

Maximizers are motivated by excellence. They are not interested in problem-solving; they’d much rather take something good or even marginal and tweak it until it’s excellent. That’s how Maximizers earned the nickname “pearl divers.” Maximizers dive deep, find a pearl that is already developing, and polish it. Then, they mount that pearl in a beautiful setting and make it look like a million bucks.

Maximizers dislike spending time with people focused on negativity. They prefer instead to surround themselves with people focused on excellence. Thus, Maximizers are not ideally suited to being therapists because therapists typically address weaknesses. A coach, on the other hand, focuses on strengths, and is likely a better career fit for a Maximizer. They are also adept at building teams and helping people discover and polish their strengths. They make great managers, mentors, and coaches because they know how to take advantage of an organization’s assets.

Who is an example of monetizing their Maximizer?

It’s intriguing to know that author, speaker, and leadership guru John Maxwell has Maximizer as his #4 talent theme. 50 years ago he began his journey as a small church pastor who had huge dreams of equipping leaders to do remarkable things and lead significant lives. Over those 50 years he has created a net worth of $10 million. He is the founder of INJOY, Maximum Impact, The John Maxwell Team, ISS and EQUIP. EQUIP is an international leadership development organization working to help leaders, involved with leaders from more than 80 nations. Its mission is “to see effective Christian leaders fulfill the Great Commission in every nation.”

Maxwell speaks annually to Fortune 500 companies, international government leaders, and organizations as diverse as the United States Military Academy at West Point and the National Football League. A New York Times, Wall Street Journal, and Business Week best-selling author, he was one of 25 authors named to Amazon.com’s 10th Anniversary Hall of Fame. He’s written more than 100 books and authored several New York Times bestselling books. He was named the #1 leadership expert in the world by Inc. Magazine in 2014. The John Maxwell Team empowers coaches, trainers, and speakers, while Equip, the name for his non-profit organization, trains and mobilizes Christian leaders around the world. Would you like to hear from John Maxwell on his Maximizer strength? Check out his Becoming a Maximizer: A Minute With John Maxwell, Free Coaching Video

Maxwell thrives on taking leaders from good to great. Polishing a leader is what his 5 Levels of Leadership system are all about. He believes that every individual can increase their influence and their results by applying these 5 levels to their leadership walk.

Do you have the CliftonStrengths theme of Maximizer, or know someone who does? How can you monetize your Maximizer strength and apply the 5 Levels of Leadership to build a business like John Maxwell? Let us know your plan in the comments below. Want to talk with me about this or other strengths questions you have? Please schedule you free Ask Brent Anything call, and let’s talk strengths.