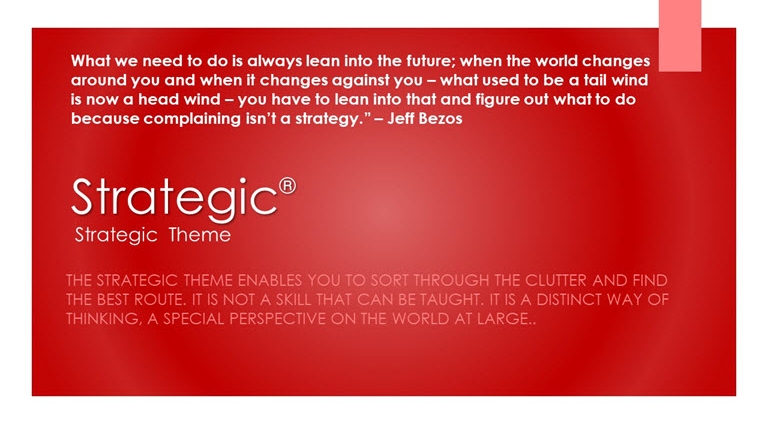 Decision-making is hard for many people. I have a friend who says the worst thing you can say to them is, “where do you want to go eat?’ But then there are those people who love to be part of the decision-making process—no matter what is being decided?

Strategic® is a CliftonStrengths® talent theme that creates alternative ways to proceed. They quickly spot the relevant patterns and issues.

If you ask a Strategic individual how they came up with a strategy, many times, they can’t tell you. That’s because strategy comes naturally. Strategic people are always asking, “What if this or that happens?” They identify all the what ifs, select a route, and strike fast.

Strategic thinkers see around the corner and focus on saving time. They aren’t interested in extraneous information; they want to get to the target. Some are pinned as devil’s advocates, but most people with this strength aren’t trying to be defensive or combative. They are only looking for the most efficient way to succeed.

Coaching and training with Strategic people, I help them create specific goals, articulate their dreams, maximize their relationships, and have those “aha” moments we all long for.

Strategic individuals can help identify patterns that are otherwise overlooked and, with these patterns, create a plan—whether it’s a marketing plan, a speaking plan, or a business development plan.

How do entrepreneurs with the Strategic talent scale their business and make a living doing what they love? Jeff Bezos is a Strategic example.

Bezo’s monetizes his Strategic talent as an American internet, aerospace entrepreneur, media proprietor, and investor. He is best known as the founder, Chief executive officer, and president of Amazon.com, Inc. The first centi-billionaire on the Forbes wealth index, Bezos was named the “richest man in modern history” after his net worth increased to $150 billion in July 2018. In September 2018, Forbes described him as “far richer than anyone else on the planet” as he added $1.8 billion to his worth when Amazon became the second company in history to have a market cap of $1 trillion.

The beachhead strategy of starting in books (did you remember that Amazon started off as a bookseller?) began Bezo’s attempt to attack from the lines of least resistance. Had Amazon started off in every category from the first day, he’d be fighting off competitors from every side. Instead, Bezo’s choose books, and as Amazon dominated books, he added category after category in the lowest margin business surviving without profits for decades to bleed the competitors dry and increase the number of Prime subscribers. Prime has been a brilliant piece of Amazon strategy. Now that we are in the Christmas season think of all the Prime members who are shopping online. Even when it is not the holiday season, Prime members return to Amazon to spend more money on each new category Amazon enters.

Are you not sure about a strategy for your business? Schedule your ask Brent Anything call, and let’s talk about it.

5 Steps to Optimize Your Strengths in 2020
Scroll to top
Login
Lost Your Password?