After studying Sigmund Freud, Abraham Maslow developed a different type of psychology—a “healthy” psychology, as he deemed it. In fact he was the first to use the term “Positive Psychology”. Positive Psychology is part of the roots of the modern strengths movement. Maslow believed all humans have a drive to succeed and fulfill their human potential that we’re not simply reacting to crisis.

Maslow, was a second-generation Jewish immigrant from Russia and the eldest of seven children. Maslow was born in Brooklyn, New York, a timid, awkward young man who confronted heavy anti-Semitism growing up. He writes about being picked on by gangs, called names, and pelted with rocks over the course of his young life.

Of course, Maslow himself wasn’t perfect. He was a human being just like all of us, struggling with the ghosts of his past and a difficult relationship with his mother, a woman who never loved him, according to Maslow.

You may have heard about Maslow’s hierarchy of needs. 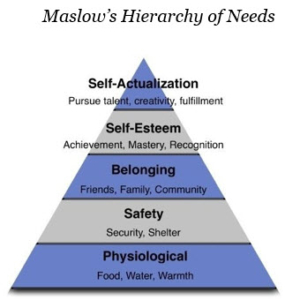 Each of us have five levels of needs—physiological, safety, belonging, self-esteem, and self-actualization. If you travel to a developing country, for example, you’ll see how the majority of its population concentrates on meeting basic physiological needs—food, water, and warmth—making it difficult to focus on anything else.

Safety encompasses not only physical security, protection, and shelter, but a sense of emotional security as well.

Belonging is the need for relationships, love, and, most importantly, unconditional acceptance. You can satisfy this need with family, friends, or another type of “family” that you consciously create. When I was a teenager in high school, a family I knew would take me to church every Sunday—something I had never been involved in before. This adopted family connected me with positive influences in my youth group and, though I had a great relationship with my parents, their presence added to my sense of belonging and being part of a community.

Self-esteem is that part of us that wants to gain mastery over ourselves, to achieve, and to make a difference. We want to know that who we are is important.

Self-actualization is our highest need and, according to Maslow, the pinnacle of life. It involves using our creative talents, having a mission in life, making a difference in the world, and pursuing a goal worthy of our talents.

Maslow was the first person to perform case studies on healthy, successful people. Instead of focusing on mental illness and abnormal psychology, Maslow studied historical figures who were successful—inspirational leaders like President Thomas Jefferson or psychologist and philosopher William James. He then moved to case studies on his contemporaries, all while fleshing out his own theory on success psychology, which eventually led him to develop the thirteen characteristics of self- actualizing people.

The 13 Characteristics of Self-Actualizing People

How will you use your strengths for each of the 13 characteristics of self-actualization? Please share an example below.

Using Your Strengths to Live Richer

Do You Know What is Expected of You At Work?
Scroll to top
Login
Lost Your Password?